The Institute for Astronomy at ETH Zurich has been operating the Bleien radio observatory since 1979. Various antennas and spectrometers have been in operation and still are today. In 2010 heliophysics moved to the Institute of 4D Technologies at Fachhochschule Nordwestschweiz (FHNW) in Windisch, Switzerland, where a new group is being built up. FHNW is now responsible for archiving all solar data and manages the analysis software.

The 5m dish is currently equipped with a simple cylindrical horn-antenna (copper coffee can)
observing in the frequency range 980 MHz – 1300 MHz in linear polarization. The system is used as experimental setup for the project HIMap to determine foreground maps, instrument stability and sensitivity.

A Long Wavelenght Antenna (LWA) is used for solar observations. 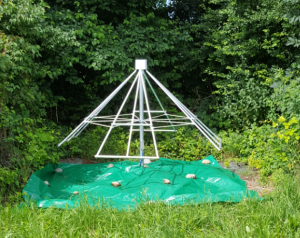