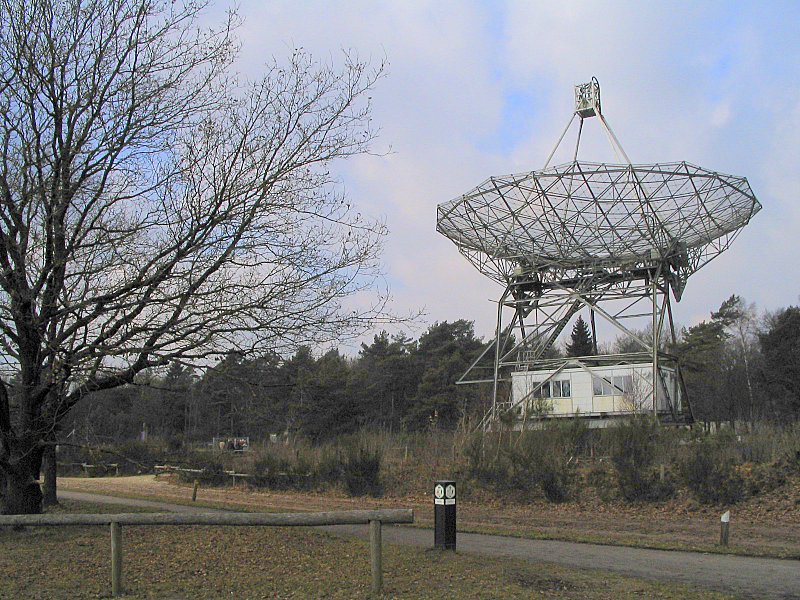 The Dwingeloo radio observatory (near Dwingeloo, m. Westerveld, in the northeastern Netherlands), is a single dish radio telescope with a diameter of 25 m. The telescope was completed in 1956. It is no longer in operation as of 2000. Since August of 2009, it is officially a national Dutch industrial heritage monument.
The “C.A. Muller Radio Astronomy Station” foundation (“CAMRAS” for short), established on January 29, 2007, restored the telescope to working order, with the consent of ASTRON, the owner of the telescope. More information about CAMRAS can be found at [1].
Paul Boven (JIVE, CAMRAS), along with radio amateurs and amateur astronomers, currently use the telescope for several projects, one being EME (communications). EME, also known as moonbounce, allows for people on different places of Earth to communicate via the Moon. In this technique, radio wave signals are aimed at the Moon by one location, bounce off the Moon’s surface, and are detected by an antenna at a different location on Earth.
The site of the Dwingeloo Radio Observatory also houses most of the staff of ASTRON, and a test site for LOFAR.
Two galaxies are named after this telescope: Dwingeloo 1 and Dwingeloo 2.

Frequencies used currently: the system is under massive technical upgrade and the operating frequencies will be listed soon.